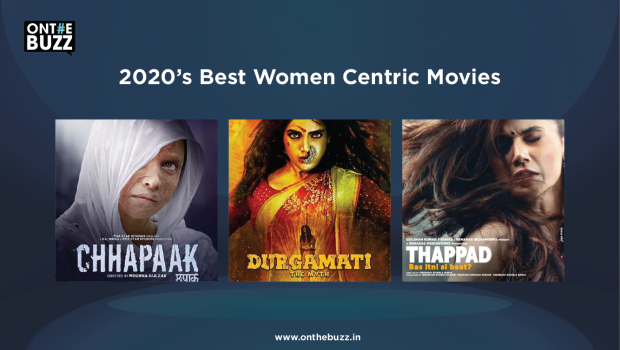 With whatever 2020 threw our way, movies and web series on OTT platforms were a saving grace. However, when we talk about movies, the word ‘Hero/Actor’ is the first word that comes to our mind.

But with changing times, the face of Hindi cinema is also changing.

From playing decorative roles in movies to playing a strong force, women have come a long way. It was recently when the number of female-centric films in Bollywood grew consistently so much that we have dozens of such films in the last few years. The year 2020 broke the notion of men ruling Bollywood. 2020 was all about women in Hindi cinema.

Here we have listed down some of the best women-centric films that were released in the year 2020.

The leading ladies in these films are not just props or ornaments, but in fact, are central characters around whom the stories revolve. These movies inspired women all around the nation on how to take control of their lives.

Cheers to 2020 for teaching us a lot of things. Let’s see how women in Hindi cinema were progressing in the year 2020.

The real story of acid attack survivor Laxmi Agarwal was brought alive on the screen by Bollywood Industry’s favorite star Deepika Padukone. Ever since the movie was announced and the first look poster came out, Deepika’s fans went into a frenzy over her audacious makeover to look the part of an acid attack survivor. Directed by the very talented Meghna Gulzar, Chhapaak also starred Vikrant Massey in the leading role. The heart-wrenching storyline, background score, and top-notch acting make this movie one of the best movies that Bollywood has ever produced. If you haven’t watched the movie yet, watch the trailer now to feel the goosebumps all over your body.

Starring the Queen of Bollywood, Kangana Ranaut, Panga is a story of a woman who has forgotten her skills of Kabaddi because of her daily life as a typical Indian mother and housewife. Also starring Jassie Gill, Neena Gupta, and Richa Chadha, Panga is a motivational journey of a woman and her family. The movie has been directed by Ashwini Iyer Tiwari and is the best watch with your family on a perfect weekend. Watch the trailer below.

The rising superstar of Bollywood, Taapsee Pannu (Amrita), is constantly delivering some hard-hitting movies and is slowly marking her name in the industry as a well-established and an A-grade actor. Where movies like Arjun Reddy and Kabir Singh glorified violence (merely a slap) in relationships, Anubhav Sinha’s Thappad questioned it. “I know it is just a slap, but he simply can’t slap me”, this dialogue had people questioning the entire equation of patriarchy and misogyny. While people asked Amrita to forgive, forget, and move on, Amrita was determined to fight for her dignity. This movie is intense and will make you question so many things. Watch the trailer of Thappad below.

Set in the backdrop of the 1880’s Bengal presidency, Bulbbul is a story of a child-bride and her journey from innocence to strength. The leading lady, Tripti Dimri was highly praised for her performance in the movie. The movie has a very subtle take on feminism and the color red shown in the movie is a symbol of: anger, celebration, and womanhood. If you are a fan of horror and supernatural thriller, do give Bulbbul a try. Watch the trailer of Bulbbul below.

The incredible story of the ‘Human Computer’ Shakuntala Devi was needed to be shown on the big screen. Starring Vidya Balan in the titular role, the movie traces the journey of Shakuntala Devi and how she challenged the computer, based on her remarkable mathematical skills. Apart from tracing her journey of being called a ‘human computer’, the movie also sheds light on the relationship between a mother and her daughter. Sanya Malhotra plays Shakuntala’s daughter in the movie. Watch the trailer here.

India is blessed with so many brave-hearted women that we can only bow in front of them and take inspiration. Sharing one such incredible story, Bollywood gave us Gunjan Saxena: The Kargil Girl. The movie stars Janhvi Kapoor in the titular role, and tells the story of the first woman Indian Air Force combat pilot: Gunjan Saxena. She played a major role in Kargil War (1999) and helped in evacuating injured soldiers during the war. Gunjan was awarded Shaurya Chakra for her bravery. The movie is nothing short of an inspiration. Pankaj Tripathi, who played Gunjan’a father in the movie, soon became the best onscreen dad in Bollywood. Watch the trailer here.

Dolly Kitty Aur Woh Chamakte Sitare is another bold movie from the very bold director Alankrita Shrivastava who earlier directed Lipstick Under My Burkha. The movie is about two cousins looking for independence and freedom. While one is tangled up in a hollow marriage, one looks for a job in a call center. The rest of the story is a chaotic tale of lies, independence, and some stolen freedom. Starring Konkona Sen Sharma and Bhumi Pednekar, check out the trailer of Dolly Kitty Aur Woh Chamakte Sitare below.

An amazing star cast, a gripping plotline, a thrilling storyline that will keep you on the edge of your seat! What more can you ask from a horror thriller? Durgamati is your perfect family entertainer with Bhumi Pednekar at her best. A remake of the Telugu-Tamil bilingual film Bhaagamathie (2018) which starred the superstar Anushka Shetty in the leading role, Bhumi did justice to the role and she was a perfect fit for Anushka’s shoes. The movie has a gripping climax, and when you will think that the movie is over it brings out another major climax. Watch the intriguing trailer of Durgamati below.

Check Out: Gorgeous Bridal Nail Arts For Your Wedding Day!