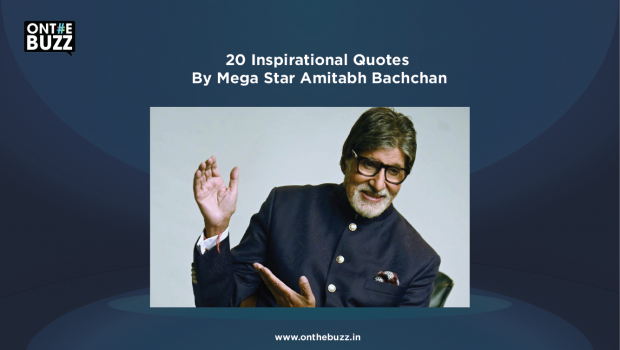 Amitabh Bachchan! The name has so much weightage that it speaks of power, fame, dignity, and more! Also referred to as the Shahenshah of Bollywood, Sadi ka Mahanayak (Greatest actor of the century), Star of the Millennium, or Big B, Amitabh Bachchan has done over 200 movies across multiple languages. He might be widely known for his acting in Bollywood films, but he also is a film producer, television host, occasional playback singer, and a former politician.

In the 1970s, Big B started a trend of ‘Angry Young Man’ with his movies which were inclined towards, crime intolerance, revenge, and angriness. The movies which established his career were Zanjeer, Sholay, Don, Deewar, etc. He has starred in over 200 films in a career spanning five decades. If we look at the face of world cinema, Bachchan is widely regarded as one of the greatest and most influential actors in the history of cinema. His dominance in the Indian movies was so much so that in the 1970s and 1980s, the French director François Truffaut called him a ‘one-man industry’.

Big B is a trendsetter, to begin with, if any Bollywood celebrity’s hairstyle of the ’70s and ’80s took center stage then it was Amitabh Bachchan’s hairstyle. The lanky angry young man who ruled the box-office with a series of blockbusters maintained a simple hairdo which included his long hair covering his collar as well as ears partially with a center parting, became a trendsetter which came to be known as the Amitabh Bachchan cut in salons across India.

Given his fame & dedication towards cinema, the French government decided to give the Legion of Honour in the Chevalier class to Amitabh Bachchan in 2005. He also has his name in the Guinness world record book for becoming the only star to sing the devotional ‘Shri Hanuman Chalisa’ along with 19 other popular singers.

He is one of the most influential peoples upon whom many people look up to. His quotes on life and wisdom are something that everyone should take inspiration from. May Amitabh Bachchan’s quotes inspire you to take action so that you may live your dreams.

Here are some of Amitabh Bachchan’s most evoking quotes:

“Make your own choices in light of your own wisdom.”

“Bad times either destroy you or make you strong enough to be who you actually are.”

“No one is perfect, and criticism is always welcome and expected.”

“One of the most difficult, and exasperating words to utter, has perhaps the easiest utterance: No!”

“It is the luminosity of lights that illuminates our presence.. else we are just so common.”

“’No’ is an entire sentence in itself. No means no, and when somebody says it, you need to stop.”

“Coming together should be considered something positive for people and communities. When thoughts come together, that can be more positive than an individual thought.”

“People will force their thinking on you, their boundaries on you. They will tell you how to dress, how to behave, who you can meet, and where you can go. Don’t live in the shadows of people’s judgment.”

“I am insecure about tomorrow. Will I get another job? Will it be appreciated? I will pursue acting for as long as I have a face and body that is acceptable to the people, but I still worry that if I don’t do better tomorrow, it will all go away.”

“I don’t use any techniques; I’m not trained to be an actor. I just enjoy working in films.”

“I am very happy with what I see. The grey, the not so grey, and the camouflaged. That’s life. One has to live with it.”

“I may be number 1 to 10 at the box office but that still doesn’t mean that I am irreplaceable.”

“I believe that cinema picks up ideas from the society and not the other way round.”

“Perfection needs efforts to get it right. I need to rehearse for it. Many others who are greatly more efficient than me, do not. To each his crafts! And I am no legend!”

“Life doth give a lot to us, but we count only that which has not been given.”

A Sustainable Dining Experience That Encompasses The Charm Of Alibaug: Paisley Experience

Botox In A Bottle: Best Topical Filler By Slova Cosmetics!