Why The World Is Obsessed With Nutritional Yeast Aka Nooch?! Plus, Ways To Use It Wisely! 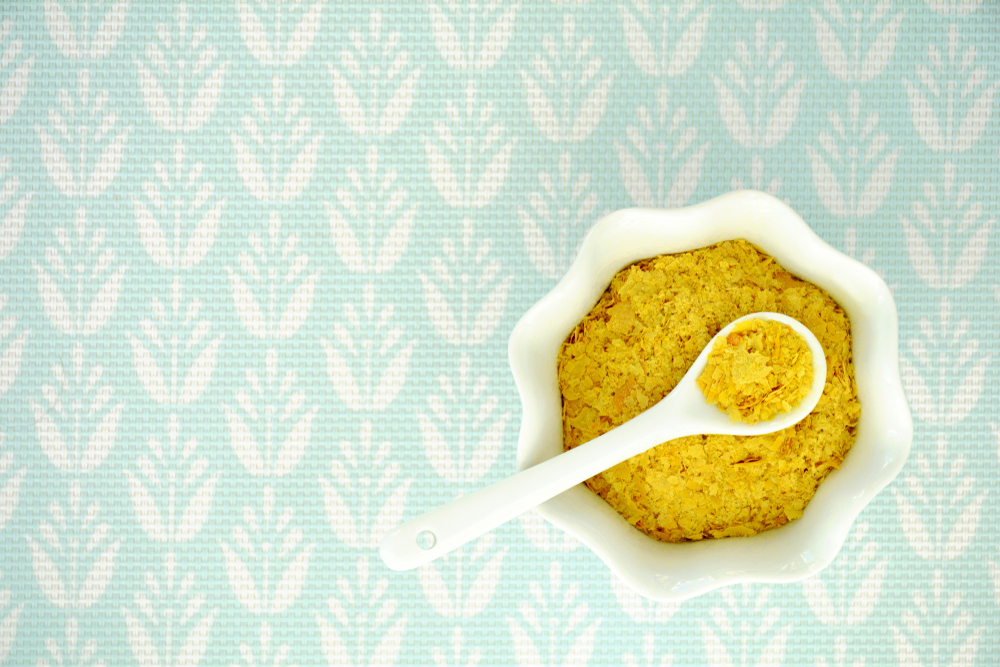 Yeast?! Haven’t we known this for decades?

From bread to beer, we used it everywhere. And out of nowhere, why is this nutritional yeast making headlines?

And what’s so “nutritional” about nutritional yeast? How’s it different good ol’ yeast?

We heard you & we’re gonna stop you right there.

So many questions & so little information, but don’t worry we got it covered for you! From nutrition to benefits to recipes, this article covers everything about the world famous Nooch aka nutritional yeast.

What Exactly Is Nutritional Yeast?

Found in many plant-based recipes & kitchens, Nutritional Yeast is the cornerstone of vegan diet for decades. It’s grown on molasses, which is harvested & dried with heat to deactivate it.

So, when added to any flour, it doesn’t rise (Don’t even try making bread with nutritional yeast 😝). With the yeast dead, it’s mainly used as a flavorant.

With the recent uprise in plant-based diets, it led nutritional yeast to the current stardom. Nooch brings umami flavor to foods that are mild in taste & comes in flakes or powder, which makes it easy to sprinkle on anything.

The similarities between nutritional yeast, brewer’s & baker’s yeast ends with the name itself.

Nutritional yeast or nooch is harvested & dried with high temperatures of heat, where as the both baker’s yeast and brewer’s yeast are activated & is used in making bread & brewing beer respectively. Let’s see the differences in depth!

Yeast, a single-celled fungus. When active, dry yeast eats sugar or starch or warm water to release carbon dioxide bubbles that make the dough rise or can be used to brew beer.

Where as, the same single-celled yeast, when heated to higher temperatures, gets deactivated and loses its potential to rise and comes in a flaked or powdered texture.

One Is An Additive & The Other Is A Supplement

When yeast is active, you can’t directly eat it right out of the packet as it grows inside your tummy and absorbs necessary nutrients. However, you can use it in making breads & beer!

One Adds Flavor & Volume, Where The Other Supplies Nutrition

Baker’s yeast makes the dough rise, but its nutritional benefit can only be enjoyed as a recipe. For suppose, if a tablespoon of Active dry yeast makes 2 bread loaves, the nutritional value of it is distributed into an entire loaf, which counts minimal.

Brewer’s yeast is used in making beer. Post the brewing process the leftover dead yeast can be consumed as a nutritional supplement, which tastes bitter.

However, when  2 tablespoons of Nutritional Yeast is consumed, it adds up surprisingly beneficial nutritional value to our body.

In a serving size of 2tbsp, nutritional yeast has 5gm of carbohydrates, 4gm from fiber & the other one gram from sugar, which occurs naturally as Nooch is a plant product.

However, the sugar content may vary from brand to brand, so make sure to check the nutritional label beforehand.

Fat content is very low in nutritional yeast. For 2tbsp of nooch, only a half gram of fat is consumed. So, no worries about the pesky fats.

Unlike most of the other plant-based foods, nutritional yeast is a rich protein source for vegans, it is a hub for all essential amino acids. In just 2tbsp of Nooch, there’s around 8gm of protein.

Other Micronutrients In Nutritional Yeast

Apart from the macronutrients, Nutritional Yeast is loaded with other vital micronutrients like vitamins & minerals.

Nooch is a great source for vitamin B. 2tbsp of Fortified nutritional yeast boasts up to 180 percent of daily vitamin B intake.

Adding to this, nutritional yeast is thiamine, niacin, riboflavin, Vitamin B12 and B6.

Can boost energy: Vitamin B12 fights against weakness and fatigue, but the vitamin is rarely found in any plant-based diet except for nutritional yeast. So, for vegans, nooch is a wholesome food source that keeps them energetic.

Great source for powerful antioxidants: Nutritional Yeast is a potent source of antioxidants like glutathione and selenomethionine, which aid in fighting the damage caused by free radicals.

Surprising Ways To Use Nutritional Yeast In Everyday Recipes

Nooch Aka Nutritional Yeast can be stored in an airtight jar in a cold dark place to preserve its vitamins and it can last up to 2 years. Here are some interesting ways to add nooch to your food, which is followed by some delicious recipes.

Taste of Paramesean to Popcorn: Grind Walnuts & Nutritional Yeast flakes with a pinch of salt & sprinkle the powder on popcorn or pasta to get that “Parm” flavor.

Nooch with baked potato:  Slather the paste of garlic & nutritional yeast on baked potatoes & drizzle it with some fruity olive oil. Try it, It’s divine!

Nutritional Yeast is a highly nutritious staple food that comes with impressive health benefits & it’s a great choice for vegans as a great source of energy.

Moreover, Nutritional Yeast happens to be a powerhouse of fiber, protein, sodium & carbs.

This superfood is versatile, apart from being nutritious, nooch is also a great umami flavorant that can be added to a variety of dishes.

Why Cold Brew Coffee Became So Cool – Make Your Perfect Brew in 4-Steps!

What is DHA? 8 Best Vegan Sources Of DHA & EPA