Celebrity Workout Secrets: Inside Story Of Celebs And Their Workout Regimen 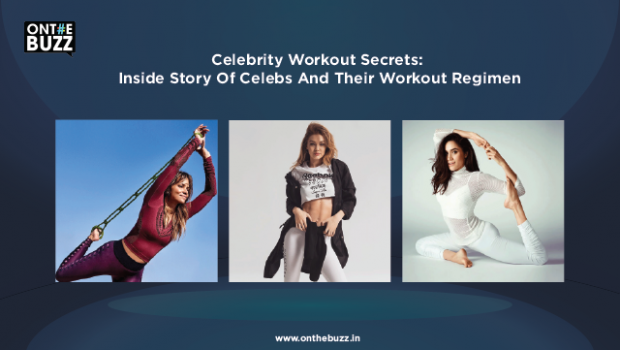 Actors do a lot to preserve their pristine physique and looks. They control their diet, use different cosmetics to look more glamorous, but, more importantly, they believe in physical fitness, so they workout. These fitness buffs drip sweat & burn calories just to wow us with their chiseled physique on screen.

Actors are said to be most people’s role models. Their fans try to mimic them in every sense possible. While some fans wear their favorite star’s designer wear and some get their hair styled after them, some try to imitate their favorite star’s chiseled physique. If you too are trying to have a super sculpted body but are finding it hard to stick to working out, here we are sharing some of the secrets of celebrity workouts.

Read on to know how hard celebrities toil to get a toned body to look beautiful on the silver screen.

Looking at her figure, it is hard to believe that Beyonce’ aka Queen B has given birth to three children, including twins. Apart from all the tough workout regimes, Beyonce’ believes in having an exciting workout playlist. As told to Harper Bazar, Beyonce’: I do a lot of things with little weights—like, I’ll put on a song that I really like and I’ll do [bicep curls with] five-pound weights for the duration of the song and just try to burn out. Your jaws must have dropped every time seeing Beyonce’ pulling off some insane dance moves on stage. The iconic pop star works hard with regular SoulCycle sessions. She follows full-body workouts involving standing oblique crunches, dumbbell punches, medicine ball sit-ups, lunges, and more.

Jennifer Lopez aka J.Lo has killer abs and butt, and there is no argument there. The way this 51-year-old pop star dances her way up on stages is just incredible in itself. A proud mother of 2, J.Lo has been ripped since 2001. She works with multiple trainers, depending on which coast she is on. She makes things fresh, interesting and challenging by switching up her workout routines. She is a big fan of HIIT workouts like: planks, abs workouts, full-body training, and platypus walk (moves that tone her butt). Also, J.Lo never skips a workout, she hits the gym first thing in the morning to make sure that amid her busy schedule, she doesn’t miss her fitness routine.

New mamma, Gigi Hadid, just welcomed her baby girl with former One Direction singer Zayn Malik. The world-famous supermodel is one of the fittest celebrities with a figure to die for. The 25 years old Victoria’s Secret model does boxing every single day and told People magazine that she enjoys sports so much, that it doesn’t even feel like exercising. “When you’re boxing, you get so into it mentally that you kind of forget what’s going on,” she said. The new mom, Gigi, is back in her shape and it’s all her hard work and hardcore exercises. Gigi’s trainer Rob Piela says that getting abs like Gigi is really a matter of doing planks, crunches, and leg raises.

Nobody will believe the fact that Jennifer Aniston is 51 years old! Crazy, right? The actress is known for love towards yoga, but she also goes hard in the gym. She explained her workout routine to Vogue: “throwing heavy boulders around and pushing medicine balls and wiggling and shaking that big rope thing [battle ropes].” Aniston explained that she is a huge fan of ‘The Class’ by Taryn Toomey. It is said to be a combination of yoga, cardio, and high-intensity interval training (HIIT). ‘The Class’ promises to push both your body and your mind.

Halle Berry is often seen sharing inspirational messages on her Instagram for #FitnessFriday, which gives her fans a glimpse into her intense workout regimen. For starters, the Academy Award-winning actress can pull off some insane yoga poses. Judging by her social media posts, one can say that she also enjoys boxing as a medium of physical fitness. She usually pairs exercise with meditation that helps her herself relax, focus on her breathing, and release stress. And above everything, Halle Berry is 54 years old. We rest our case here!

The very loved pop star, Britney Spears, is always treating her fans with her workout, dance, and yoga photos and videos on social media. The singer in August 2018 shared on Twitter that she likes to do yoga on tour: “Traveling from hotel to hotel can make you a little stir crazy, so I decided to start doing two hours of yoga in each room!” she wrote. “The bare floors gave me a pretty solid grip on the ground without a mat. I was very sore the next day, but at least I got to use my time wisely.”

Long before she married Prince Harry and became the Duchess of Sussex, Meghan Markle has been a fitness fanatic her whole life. Running and yoga have been two staples of her fitness routine for years. In an interview with US Weekly, Meghan said that Pilates is “the best thing you could do for your body”. Her former trainer (for three years), Craig McNamee, C.S.C.S., founder of Catalyst Health in Toronto, Canada, told Women’s Health: “Meghan Markle’s fitness definitely takes priority; she’s very focused on her health.   “When she gets to the gym, there’s no real complaining. She gets down to business right away and really enjoys it.”

Rome was not built in a day! These celebrities are working out since they got into showbiz (some, even earlier than that). They work out intensely with celebrity fitness trainers and dieticians to follow up on the carbs they are eating.

Following a strict diet regimen, coupled with an intense workout plan can give you a celeb like physique that you desire.