A Daily Dose of Caffeine to Boost your Health! 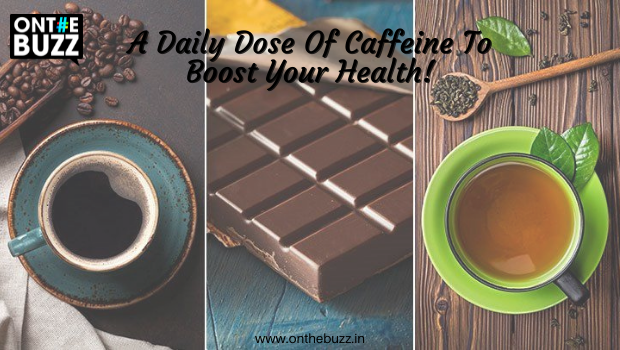 When you wake up, What is the first thing you wanna have??

For me, it has always been a nice dose of caffeine to kick start the day. A nice cup of coffee or tea boosts you up for the whole day. It gives you an extra jolt of energy. A cup of caffeine act as a mild stimulant to the central nervous system which quickly boosts your alertness and energy levels.

In this pandemic, you all must have tried your hands on the social media famous, Dalgona Coffee! I did too. Though while making Dalgona coffee my hands use to pain a lot. But a sip of it used to make me feel alright!! I have tried different recipes to enjoy my daily dose of caffeine. I even tried black coffee, which I used to hate. But now my morning doesn’t start without a cup of black coffee. A cup of Hot Black Coffee (without any additives) has its own benefits… Stay tuned to know more!

You also must have tried your hands on different ways of having caffeine in your system, right?

Each one of you reading this blog might have a little knowledge about their favorite type of coffee or tea. Let me just throw light on the story of caffeine.

Caffeine was first extracted from cocoa beans into its purest form, a white powder, in the 1820s by a German Scientist named Friedrich Ferdinand Runge.

Recommended Caffeine Dose: Up to 400 milligrams (mg) of caffeine a day- 4 to 5 cups of brewed coffee

When you take in beverages such as coffee, tea or soda, caffeine gets absorbed in your gut and dissolves in the body’s water and fat molecules within about 45 minutes. And reaches the peaks in the blood between 15 minutes to 2 hours. It is also able to cross into your brain.

Caffeine is broken down mainly in the liver. And some of the factors like smoking speeds up this breakdown process. While oral contraceptives and pregnancy can slow it down. During pregnancy’s third trimester, caffeine can remain in your body for around 15 hours. So it is always advisable to consult your gynaecologist about caffeine intake.

Some of the food components which contain fibres can also delay the absorption of caffeine in the blood. Therefore, drinking your morning coffee on an empty stomach might give you a quick energy boost than if you drank it while eating breakfast.

You must be seeing a lot of reels on social media on coffee and especially this one “More Expresso, Less Depreso. More Caffeine, Less Stressine.” But is it actually true??? Some of you who are coffee level might relate to this reel… So let me now share some amazing benefits of taking caffeine daily.

Caffeine is responsible to block an inhibitory neurotransmitter in your brain and increasing dopamine, which causes a stimulant effect. This increase in dopamine in turn helps in improving your mood, giving you a jolt of energy and improving various other aspects of brain function.

2 A cup of Caffeine with its many Nutritional Value

You are getting a nice portion of Vitamins and essential nutrients in that cup!!

A study published that caffeine can increase fat burning by around 10% in obese individuals and 29% in lean people. Caffeine stimulates the sympathetic nervous system, which increases the breakdown of the fat cells and also suppresses hunger. This is possible only when you avoid adding any extra calories (extra calories from cream, milk, or sweetener) as it can easily negate any calorie deficit caused by caffeine.

Many people drink a strong cup of coffee before they had to the gym. They do this because as mentioned above caffeine breaks down the body fat, thus making free fatty acids available as fuel for intense physical exertion.

4 Makes your Heart and Liver Happy

Though caffeine can moderately increase blood pressure, coffee drinkers (in a controlled manner 1-2 cups a day) have less risk of any cardiovascular disease. Women who drink at least one cup of coffee a day, have a lowered level of stroke risk (which is the fourth leading cause of death in women).

As mentioned above, caffeine breaks down in the liver. And even research has shown that caffeine lovers are more likely to have beneficial liver enzyme levels than people who are not. Caffeine intake is associated with a lower risk of liver cancer, fibrosis, and cirrhosis.

Sometimes in between a busy schedule, you pause and drink a cup of your favourite coffee/tea. And after a cup, you feel yourself getting de-stressed and feel energetic. Now we know why we feel energetic but how a cup of caffeine changes our mood??

Caffeine stimulates the release of the neurotransmitter dopamine, which produces euphoria and a pleasant feeling. Thus making you feel relaxed and energetic. It is said that caffeine appears to lower the risk of developing any serious mental disorder and also reduces the suicidal risk. In a Harvard study published in 2011, women who drank 4 or more cups of coffee per day had a 20% lower risk of becoming depressed.

6 Lowers the risk of 2 types of Cancer

Cancer is one of the world’s leading causes of death. But there are two types of cancer you might protect yourself from by enjoying your cup of caffeine – liver and colorectal cancer. Studies showed that coffee drinkers have up to a 40% lower risk of liver cancer. Similarly, one study with 489,706 people found out that those who drank 4–5 cups of coffee per day had a 15% lower risk of colorectal cancer.

Almost time to have a second dose of caffeine

It’s time to head to our office pantry or nearby tapri or your kitchen to enjoy your favourite cup of coffee or tea.

We have seen above a number of impressive health benefits of caffeine. Given that coffee drinkers are less likely to get many diseases, it makes sense in saying that a daily dose of caffeine could help you live longer. Your daily cup of happiness can not only help you feel energized but also helps you feel de-stress. And I know the star benefit of caffeine for many of you is how it helps in burning fat.

This article is contributed by 5PM Ardor!

Author bio: 5PM Ardor: The place where you enjoy a short read on skincare, food, and books while relishing your favorite cup of tea or coffee…

Ardor means a feeling of warmth and enthusiasm. While ‘5 pm’ signifies the time when usually we have a coffee/tea break. 5 pm is also the time when some of us complete our work and leave for our respective homes. The reason behind this name is that along with the warmth of coffee and tea, people should also feel that warmth (affection) while reading blogs on 5pmardor. They should feel enthusiastic and inspired after reading freshly designed articles.

12 Yoga Asanas To Do During The Menstrual Cycle

Whey or Casein: What to choose?